Sunday was the annual Bath half-marathon, with great weather helping over twelve thousand runners pace the streets. It’s an amazing and moving spectacle, with a huge variety of people running for lots of different causes, some very personal and some very public. Many were in fancy dress (spot the large wig), including two taps, a squad of storm-troopers, a camel, a two person pantomime horse, and one was carrying a fridge full of beer. They were mostly moving too fast for me to sketch with a pen (see final picture), so I switched back to brush-pen, which gave me a better chance to catch the generic poses and shapes that were flowing past in a continuous stream for over an hour (must work on improving my visual memory). The spectators were much easier… 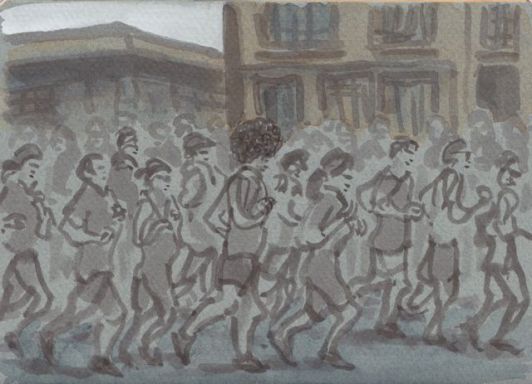 The usual inks, mostly in brush-pen, and a smattering of water-colour, A5 – 20 mins each?