Update June 2017 – Here’s a set of instructions for making the current incarnation of my pocket-sized Muji palette: 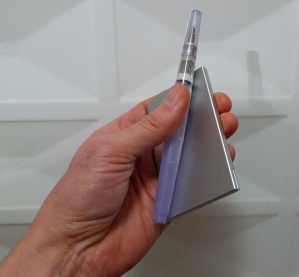 This is an area where I’ve found it easy to get lost in the creation of resources and materials when I could have been sketching. But the fever seems to have passed, leaving me with a diverse set of palettes for different occasions…

The creation of mini palettes is richly documented on the web, and the range of approaches is huge, from the fairly ubiquitous and simple Altoids tin adaption, to Russ Stutler who vacuum forms his own plastic palette inserts which he adds to home made wooden hinged panels. I think I’m somewhere in the middle of this continuum, but time will tell.

So, strictly for the obsessed, here are some of my various palette versions, all alongside a water-brush for scale:

The first pocket palette I made, using a mint tin, the lid painted white, with 12 half-pans of paint (held in place with magnetic tape) and enough room left to house a Koi folding water-brush. The whole thing was a bit too thick, and heavy and I ended up unnecessarily carrying about £60 worth of paint around. Half-pans are also very narrow, so there’s little room for the brush to move around.

The great leap forward! Using a Muji card case, made from aluminium so very light, and also very thin. I used plastic strip, 4mm square section, that I found in a modellers’ shop to make the separate pans, super-glued into place. Still 12 colours, so I used the lid to mix colours, having to wipe it clean several times during even a small sketch, and the pans were still frustratingly small. 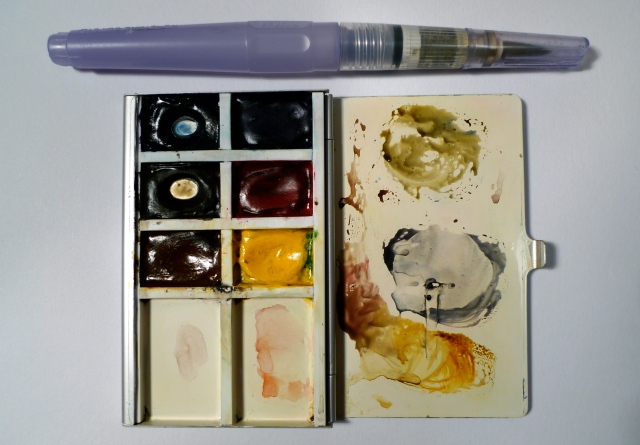 The final (so far) version of the pocket sized kit. Another Muji card-case, but using some thinner white plastic strips. Now only 6 colours so room for 2 extra mixing wells and bigger pans for the paint (almost full-pan). This one’s great for sketches in an A6 book (small Moleskine size), but too small for anything bigger. So… 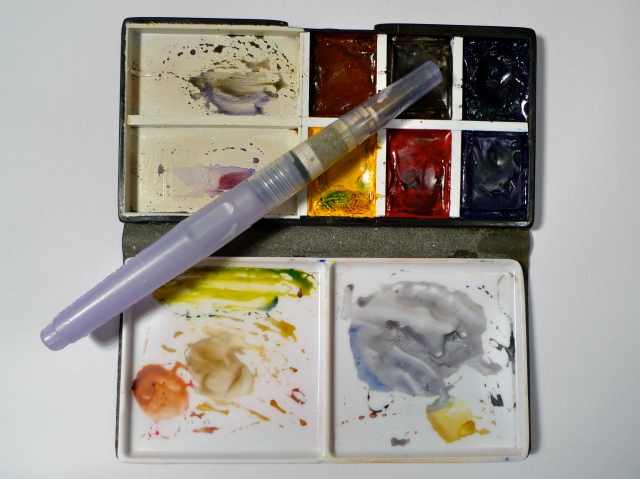 I made this one for sketching in an A5 book. The base of an eye-shadow set (hmmm) with 6 paint wells and 2 mixing areas built out of white plastic strips, and 2 large mixing areas cut from a cheap plastic folding palette. Both bits glued onto the inside of a folding book cover.

And the biggest one, for sketching with big paper, A4/A3 sketch books, and using a big brush. It a fairly inexpensive plastic palette with a thumbhole, made for 12 whole pans but I cut out some of the dividers so I can have 6 truly enormous paint wells. It’s lightweight but well made, £15 from Ken Bromley. I also added some extra strips of plastic to sub-divide a couple of the deep mixing wells so I can have more colours mixed at once.

Here are the 3 palettes next to each other so you can see relative size differences.

One final palette, originally a very cute Rowney set made from enamelled metal with 18 quarter-pans. It was £12 on eBay, I didn’t think much of the paints and quarter-pans are absurdly small, so I completely stripped it out, leaving room for 6 half-pans and some mixing wells that I cut out of a cheap plastic folding palette. As these sets are usually £40 new this approach isn’t very practical. Probably a future gift for someone…